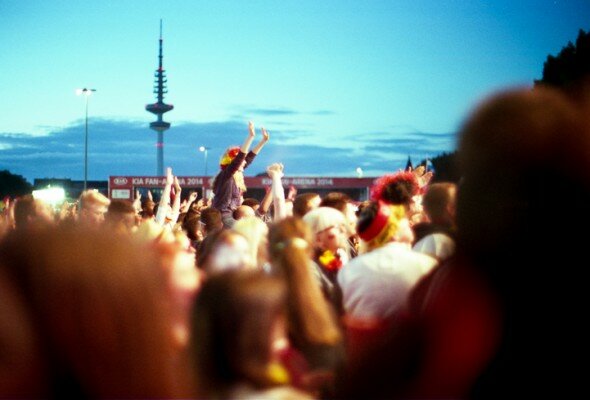 In case you haven’t noticed, soccer is a huge thing in Germany. Immensely huge. While at home, various clubs attract specific clientele – St. Pauli for example is much more attractive to the “social underbelly” than Bayern Munich is which tends to attract well situated followers. When it comes to the big international tournaments, soccer becomes the great equalizer and Germans from all walks of life unite behind Schwarz-Rot-Gold. One of the best places to do so is at the many places where public viewing is offered. On Hamburg’s Heiligengeistfeld, a wide open space framed by the St. Pauli stadium, a huge WWII anti-aircraft bunker and Planten en Blomen, the city has set up a public viewing space. I went there to experience and photograph the round of 16 game Germany versus Algeria.

I was interested in photographing the atmosphere as well as the quiet moments in between at such a large gathering of humans in a confined space – many intoxicated with alcohol, infused with excitement or anxiety about the game. I didn’t want to produce the same images professional photographers of the press and media come up with – standing far away from the crowd with their huge DSLRs and white long focal lengths Canon L lenses producing crisp, clinical, noiseless images of such an emotional, gritty event. No, I wanted emotion. I wanted the absence of distance between my lens and the action. I wanted grain. And I wanted color. I wanted bold colors. I wanted to soak up as much of Schwarz-Rot-Gold as possible. I wanted those colors to fill the frame. Rough and wild.

To achieve this, I had to be in the middle of it. I arrived early before the game, in fact the French were still playing against Nigeria on the big screen when I arrived. It was still bright, the sun providing for harsh light on the almost empty space with a game running that didn’t attract much viewers in Hamburg. Bit by bit before the game, fans arrived, looking for a good place to occupy.

Fans tried their luck at shooting balls at a goal target for prices.

The light faded, more crowds arrived and the sponsor company used the opportunity to both keep the crowd entertained while placing products most people didn’t come to see. People came to see the German team win against Algeria. And people came to collaboratively enjoy this experience on common grounds. Like a young teenage couple in love, embracing to kiss surrounded by fans eager in anticipation of a game to start within minutes.

A teenage couple embracing for a kiss among soccer fans

The game started after more rounds of embarrassing attempts of on-stage entertainment featuring “singers” that moved their lips and bodies to playback recordings of cheap rhythms and texts that only the alcohol intoxicated fall prey to. And it proved to be a tedious and tiresome game to watch and endure as a German fan with Algeria giving “die Mannschaft” a hard time. Worried, troubled faces were staring at the screen with no goal for Germany in sight as opportunity after opportunity in front of the Algerian goal went by unused. From time to time, fans started chanting “Deutschland schießt ein Tor, schießt ein Tor, schießt ein Tooor!” to cheer their team to success.

Among the much larger fans, I spotted a young boy. A tiny, out of place boy standing by his father and another relative or friend, shyly holding a German flag and wearing the German colors on his cheeks. I watched him follow the game eagerly, yet I could tell not only the experience of watching the game but being here was overwhelming and strange for him. I photographed him and after a couple of frames he noticed the camera pointed at him, quietly and shyly looking at me. He doesn’t speak or understand German, yet he is wearing German colors and cheering for the German team in their attempt for their fourth World Cup title. From his father, I learned that this young boy is a refugee from Mosul in Iraq where Islamic fundamentalists conquered and terrorized large parts of the country, forcing hundreds of thousands to flee from their barbaric violence. “Irak ist kaputt.” – “Iraq is broken” he told me. He had just arrived in Germany a week earlier and will start school in Hamburg this summer. I snapped a couple of pictures of the group and promised to send them the images. In hindsight, I think this is what the World Cup is about. It’s not about soccer primarily or one team winning over others. It’s certainly not about a corrupt beyond repair FIFA. It’s about an event that brings people from all over the world together peacefully. Soccer is just the vehicle.

I wish him luck with his start at school in Hamburg, starting a new life in safety and enjoying more soccer games with pride in his eyes.

A new arrival to Hamburg from Mosul, Iraq.

So much anticipation and cheering had to pay off and once Joachim Löw, the German coach made some changes to the team in the second half, the game picked up and Germany started to dominate. Fans had to remain faithful and patient until the first extra time though and in the 92nd minute into the game, Germany finally managed to score. Within an instant, the anxiety of thousands exploded into a blur of black, red and gold and frenetic cries of joys and excitement. Germany went on to score a second goal in the 120th minute with Algeria scoring one for the honor a minute later, just before the game ended with 2:1 goals in favor of Germany which moved on to the quarter final.

The German team provided the setting for a wonderful summer evening in Hamburg, with no rain and plenty of teenage romance among thousands of happy German soccer fans.

Young love and a German victory

I am working on a long term photographic project about Hamburg. I am shooting this exclusively on analog cameras on 35mm film which can be acquired locally in stores in Hamburg. These images are part of this project and were shot on Rossmann HR 400, a very cheap ISO 400 35mm color film produced in Japan and sold by a local German drugstore chain. The images were also processed in Rossmann’s contractor lab and then scanned from the negatives on an Epson Perfection V350 scanner. I shot several rolls that night, using only a manual focus SLR from the 1970s, a Minolta XD7 with a Minolta MD 50mm f/1.2 and the battery driven auto-winder which allowed for 2 frames per second shooting when I needed to. Most images are shot at f/1.2 to allow as much light in as possible as I didn’t push the film but shot it rated at ISO 400.