It feels like the new year barely started and now the first quarter is already gone. And yes, in many parts of Europe, winter is still in charge! That’s very much true for my native Hamburg in northern Germany where it has snowed until the last days with large spots of snow still dominating the landscape outside. Looking back at the last year in pictures, I have compiled some of the analog highlights of the seasons for Hamburg.

Seasons are a funny thing actually, especially the recent years in north-western Europe. During the last years, Hamburg’s Alster lakes have frozen solid twice in a row. Statistically, the lakes freeze over solid every 20 years. It’s already March 31st today and looking outside, most of the ground is still covered in thick snow, temperatures are barely above zero degrees Celsius and it keeps snowing instead of raining in Hamburg. Looking at that funny chart I found on Tumblr, we actually had one or nice warm days in March to lure us into a sense of spring before winter struck back with all its force. The typical year now in Hamburg feels like one long winter season interrupted by one week of summer. This winter has officially been the darkest winter in Germany since they started the statistics. And it’s still going on until after Easter.

I have thought about this a little and everybody has to admit how easy it is for your perception to get the better of you when it comes to the weather. We usually tend to overemphasise bad weather over good weather in our memory. Looking for evidence of the constant dark and grey in Hamburg, I searched my image library of last year, featuring some of the images here. All of the below images are taken on film and scanned from the processes negatives. The colour images are all taken on the now discontinued Kodak Professional Elite Chrome 100. The black & white images were taken on a variety of true black & white and C41 based black & white film. I didn’t always track which camera and lenses I used but most of these pictures were taken with a Minolta XD7 or a Minolta CLE/Rokkor 40mm.

Winter – the perceivably longest time of the year 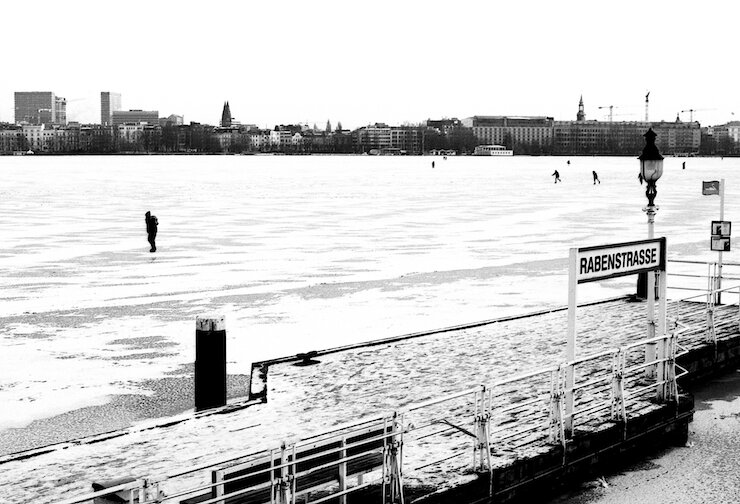 The Alster lakes freezing over is certainly one of the most noticeable events in the winter season. Tens of thousands flock onto the ice once it seems safe enough. Last year, I took my Minolta CLE and black & white film with me on a weekend when several thousand people ventured onto the ice.

With temperatures dropping to minus 20 degrees Celsius at night, the ice has a thickness of more than 15 centimetres, enough to carry the masses flocking to the ice. I’m not aware of any major accidents on the ice the last two years, although I am pretty sure with ice skating, sleighs and ice hockey matches on the ice there must have been the unavoidable bruises and cuts.

Winter can have its romantic sides in colour too, especially at the end of a short sunny winter day. The Elbe river in Hamburg does not easily freeze over and all effort is put into preventing this to keep the port open. 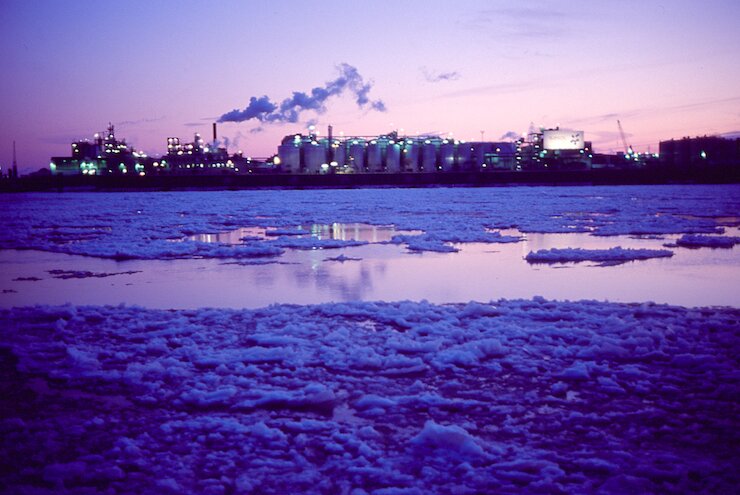 Winter Elbe. View from Hafencity across the Elbe. Hamburg. 2012

The few couple of days when it’s not winter – or Wednesday, the day we called summer last year

When summer manages to establish itself against the brutal reign of winter for a small amount of time, Hamburg becomes really pleasant, especially around the heart of the city at Jungfernstieg with its fashionable shopping streets and location to the Binnenalster. Last year, I took a series of pictures of these soap bubble artists and how they interacted with the crowd.

Of course, the longest part of the summer actually doesn’t look like this…

It looks more like this. Yes, it rains a lot in Hamburg. As a note, this image was taken with a Minolta CLE on a cheap drugstore film that is a relabelled Fujifilm emulsion.

What everybody is waiting for right now

At this time last year, I took this image with a Minolta XD7, a Minolta MD 50mm Macro and an extension tube on Kodak Professional Elite Chrome. By the time we get this sort of vegetation, fall will probably have kicked in already this year.

Let’s hope the weather improves. I am fortunate enough to escape to the dry desert heat of Nevada in a week to be part of this year’s NAB event in Las Vegas. If all the snow has melted by mid April when I get back, I will no more complain about the weather. Promised.